How Many Human Species?

The recent publication of the Neandertal/Denisovan hybrid from Denisova Cave has inspired a number of really interesting reactions from scientists quoted in the popular press.  People are openly speculating that humans, Neandertals, and Denisovans are really all part of our species, Homo sapiens, because we can (or could) all interbreed.  The Atlantic quotes John Hawks saying,

When you find a needle in a haystack, you have to start wondering if what you’re really looking at is a needlestack … This genome shows that hybrids were nowhere near as rare as people have been assuming. They must have been really common.

I can see his point.  As I mentioned, there have been 23 genomes of ancient humans sequenced, and two of them turned out to be recent hybrids.  That’s a frequency of 8.7%, which is no small number when it comes to poulation genetics.  Add to that the observation that the Denisova girl’s Denisovan father carried bits of Neandertal DNA, and you realize that the intermingling of these different humans must have been fairly easy wherever they met.

Does that mean we’re all one species?  In a Nature news article, Matthew Warren writes,

With a Neanderthal mother and a Denisovan father, what should we call the new specimen? “We shy away a little from the word ‘hybrid’,” says [ancient DNA expert Svante] Pääbo. The term implies that the two groups are discrete species of human, whereas in reality the boundaries between them are blurry — as the new study shows. Defining a species in the natural world is not always clear-cut, says [population geneticist Kelley] Harris, and it’s interesting to see long-running debates about how to categorize organisms start to be applied to humans.

This is very consistent with Pääbo’s previous comments on Neandertals and Denisovans, where he has avoided calling them separate species from modern Homo sapiens.  This is also of great interest to creationists, since young-age creationists have often insisted that Neandertals are just a variety of modern humans and within the range of variation found in modern humans (this is erroneous, by the way, but they say it anyway).  In contrast, the old-age creationists at Reasons to Believe have insisted that Neandertals must be a separate animal species and not human.

I’ve commented on this before over on my blog back in 2011, but this new discovery raises the question again, and I think it’s worth discussing.  I continue to maintain (as I always have) that Neandertals and Denisovans are separate human species that are not the same as Homo sapiens, regardless of the evidence of interbreeding between them or the frequency of that interbreeding.

Second, since we have skeletal remains of Neandertal juveniles, we can see that these distinguishing features do show up early in development.  These are not merely aberrant or extremely old Homo sapiens remains.  They have distinguishing characteristics from the moment they’re born.  They also grow and develop differently from modern Homo sapiens.

Third, their genomes are genetically distinct, quite outside the range of modern Homo sapiens.  If you compared DNA from the most distinct forms of Homo sapiens living today, you’d still find only about a fourth of the differences you’d find if you compared the DNA of any living human to the DNA of a Neandertal.  That applies just as much to Denisovans.  They are also genetically distinct.

In fact, it is the genetic distinction that allows us to recognize Neandertal/Denisovan hybrids in the first place.  If they were all within the range of modern human genetic differences, we would simply conclude that they were funny-looking Homo sapiens.  That would be a far more startling discovery.  Instead what we have are genetically distinct lineages, which means they are not interbreeding very frequently, despite what these fossils seem to indicate.

In a news article in Science, Gretchen Vogel writes,

Along the way, apparently, they freely spread their genes to outsiders. That highlights the question, [ancient DNA expert Johannes] Krause says, of why Denisovans and Neanderthals nevertheless remained genetically distinct groups. “Why don’t they come together as one population if they come together from time to time?”

Svante Pääbo thinks it has something to do with geographic isolation.  According to Warren’s Nature piece,

Pääbo agrees that Neanderthals and Denisovans would have readily bred with each other when they met – but he thinks that those encounters were rare.

That’s one possible explanation, but I still don’t think viewing Neandertals, Denisovans, and modern humans as geographically isolated varieties or subspecies does justice to the differences between them.

My final point in favor of recognizing Neandertals and Denisovans as separate species is the patchy distribution of Neandertal and Denisovan DNA in modern people.  Instead of finding DNA of ancient origin scattered randomly through modern human genomes, Neandertal and Denisovan DNA tend to show up in particular parts of our chromosomes but not in other parts.  This is not what we would expect from random variability of inheritance.  This pattern would more likely arise if certain parts of the Neandertal or Denisovan genomes were somehow poorly compatible with the genomes of modern Homo sapiens.  Those pieces would tend to be eliminated over time.

DNA of mixed compatibility is precisely what I would expect when two species hybridize.  It’s also not a bit surprising that two species could produce hybrids.  This is common in the world of biology.  Introgression – the passing of genes from one species to another – is a well-known phenomenon and the subject of many studies.  In fact, hybridization is so easy, I often wonder how we keep species separate in the first place.

The reality of multiple human species has nothing to say about their origin, of course.  As I’ve stated before, I view Neandertals, Denisovans, and modern Homo sapiens as human descendants of Adam and Eve, despite their status as separate species.  What remains here is an interesting puzzle, however.  How is it that Neandertals, Denisovans, and Homo sapiens could readily interbreed, and did so often enough that we’ve found two hybrid individuals already, but not so frequently that we all just merged into one large, variable species?  The conventional model, exemplified here by Pääbo, offers geographic isolation as the solution.  These people could interbreed readily enough, but it was rare because they didn’t meet that often.

As a young-age creationist, I see two related questions: How did we get such genetic differences in the first place and why didn’t the populations merge?  I suspect the answer to the second question has to do with the confusion at Babel.  These peoples didn’t merge for the same reason other peoples didn’t merge: They couldn’t understand each other.  How we got these genetic differences in the first place is a more interesting question that still remains to be answered.

Reblogged with permission from Humangenesis.org. The views expressed in this article reflect those of the author.

all humans are from Adam and Eve and then Noah and family on the ark.
yet I do insist we are now different species as much as any species is anywhere. to be a species all one must be is a segregated breeding poilation that maintains a bodyplan/by genes and thus by looking at the different bodyplans of humans this is clear. Peoples of africa are clearly different species frp, species in europe and Asia. We are not one species any more. or species does not exist. it does exist and here we are.

I don’t think conventional science bases the line for human species at the level of contemporary ethnic groups.
Then again, maybe Denisova and Neanderthal etc are examples of a kind of hyper-speciation unique to the late Uruk expansion. 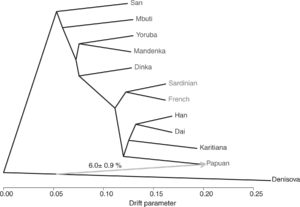 How did we get such genetic differences in the first place?

The relatively mild judgement of the Babel confusion seems most plausible as you mention, for by it we can expect a number of routes to observe speciation.

Work from the likes of Dr Douglas Petrovich shows that during the Uruk expansion after the confusion, differing peoples lived side by side, but did not mix.
Additionally, communication toward the end of reproduction, whether by the possession of specifically coloured extravangant feathers or by a common spoken language, can influence speciation. So the lack of ability for the various peoples to communicate with each other may have allowed for sympatric speciation.

As the peoples dispersed they were moving into different habitats and as time progressed the climate changed, thus giving rise to parapatric speciation.
Once all the peoples had arrived at their designated quarters, allopatric speciation would continue to take effect for certain people groups living in mountainous areas or separated by vast seas/oceans etc, and so their distinctions in morphological features would have exarcerbated through geographical isolation.

So as time progressed during the dispersion, allopatric, sympatric and parapatric speciation may have taken place.
Eventually, the peoples reached the bounds of their habitation and mixing between the peoples would have begun to take place, through migration, wars etc.
If mixing took place during the dispersion I would think it did so at very low rates, but certainly at the completion of the dispersion, the mixing rates would have increased.
But was this enough to bring about the distinctions between Sapien, Denisovan and Neanderthal?

Perhaps Denisova and Neanderthal are examples of a kind of hyper-speciation, whereby their lineage sustained near perfect speciation, almost never intermixing with people groups during the dispersion, through the three forms of speciation, allopatric, parapatric and sympatric, thus giving rise to their peculiar features.
Perhaps their exarcerbated features are an exagerration of a feature that was originally considered uncomely by most human peoples, therefore contributing to their increased genetic isolation. The freak among freaks?

Or was it the reverse, were they a proud people? Did they consider themselves superior to the rest of mankind because of their peculiar features and therefore separated themselves from other peoples more doggedly than their counterparts? And perhaps were judged into oblivion for their conceit…
If not, another related question is, are Denisova and Neanderthal to be thought of as two extinct nations in light of Acts 17:26?

Read More
NOT YOUR AVERAGE BONEBED The year was 1996. A rancher on Hanson Ranch in the badlands of eastern…
Read More
190
0
0
Read More
Some of the most extensive coal reserves in the world are found right here in the United States.…
Read More
200
0
0
Read More
It has long been recognized that there are tremendous similarities shared between modern birds and non-avian dinosaurs like…
Read More
51
0
0
Read More
The book of Exodus continues the historical narrative of Genesis and records the dramatic exit of the Israelites…
Read More
69
0
2
Read More
From The Quest: Exploring Creation’s Hardest Problems, Ch. 1, pgs. 12-14 Christian Europe experienced a series of huge…
Read More
0
0
0
Read More
Dinosaurs came in all shapes and sizes. Some, like the long-necked Alamosaurus were lumbering behemoths that weighed over…
Read More
42
0
0

Have you Seen the Movie?

What is Disparity, and Where Did It Come From?

What was the World like when Noah stepped off the Ark?

How Did God Oxygenate the Atmosphere During Creation Week?