Why Don’t We See Evidence for Biblical Events?

The Bible contains many fascinating narratives presented as historical accounts. Yet science has long decried the Bible as a religious text with little historical value. Many see narratives such as the Garden of Eden, Noah’s Flood, the Tower of Babel, the Exodus, the Conquest, and King David as nothing more than religious myths. This presents a problem for those who believe that the Bible is true. If all these events happened as recorded in the Bible, why don’t we see evidence for them?

One reason that we might not find evidence for biblical events is that the evidence hasn’t survived the millennia. For example, Genesis talks about the Garden of Eden, where Adam and Eve lived. However, Noah’s Flood would have washed the Garden away, along with the rest of the pre-Flood earth’s land surface (Genesis 6:13 & Matthew 24:39), so we shouldn’t expect to find it today.

Another example is the Exodus. The Bible talks about the Israelites leaving Egypt, crossing the Red Sea, and wandering in the wilderness for 40 years. Yet archaeologists do not expect to find direct evidence of the Exodus because the Israelites lived in tents, not houses. Tents decompose over time and don’t leave evidence behind.

“The lack of direct evidence does not mean that the Garden of Eden did not exist or that the Exodus did not happen. Absence of evidence is not evidence of absence. “

Even when direct evidence for a biblical event is lacking, scholars can sometimes establish the historicity of an event through indirect evidence. Returning to the example of the Exodus, it is unlikely that artifacts from the Israelites’ wanderings in the wilderness have survived. However, evidence exists of Israelites living in Egypt. These material remains suggest that the Israelites resided in the country for some time and then departed en masse (Petrovich, forthcoming). And even though no direct evidence of the Garden of Eden exists, the presence of a worldwide erosion surface called the Great Unconformity testifies to the catastrophic activity of rushing water at the beginning of the Flood by which it may have been destroyed (Dickens, 2017).

We Are Looking in the Wrong Places

Another reason that we might not find evidence for biblical events is that we are looking in the wrong places. For example, when archaeologists began excavating ancient cities in Israel, they discovered that many of them were destroyed in the 13th century BC. This led archaeologists to assume that the Israelite Conquest must have occurred at that time.

However, further excavations revealed that key sites mentioned in the book of Joshua do not display evidence of a destruction in the 13th century BC.  Some of them did not even exist at that time. Rather than reexamining the evidence based on these new discoveries, many archaeologists have instead concluded that the Conquest did not occur in the manner described in the Bible. Some believe that it did not occur at all. These conclusions are based on assumptions, not evidence.

The Bible provides enough dates and historical references that we can calculate the biblical date for the Conquest. The Bible suggests that the Conquest occurred at the end of the 15th century BC. Those who rejected the historicity of the Conquest were looking for evidence in the wrong time period. For more on the date of the Exodus and Conquest, see this blog post.

Another example is the Tower of Babel. It would be easy to associate it with with Babylon. However, that city came into existence long after the construction of the Tower of Babel. Therefore, those who seek the Tower of Babel at Babylon are not likely to find it. Instead, the city of Eridu features a massive ziggurat platform that the residents of the city abandoned before completing the tower. Archaeological evidence suggests that this abandonment was accompanied by a massive emmigration of people in all directions. This matches the biblical record very well. For more on this topic, see this video.

We are Interpreting the Evidence Incorrectly

Another reason that we may not always see evidence for biblical events is that we are interpreting the data incorrectly. It is easy to base our conclusions upon unverifiable assumptions, often without even realizing it. When this continues to occur over a period of time, it can lead to a whole system of beliefs that will crumble if the primary assumption is proven to be incorrect.

The geologic column is a good example of this. Creation scientists believe that Noah’s Flood laid down much of the geologic column rapidly. If this is the case, then specific packages of sedimentary rock represent phases of this deluge. Some may also represent localized or regional-scale natural disasters before and/or afterward.

However, secular scientists believe that these sedimentary packages developed over millions of years. This is mostly based on the premise that the geologic processes that formed them (whether gradual or catastrophic) were by and large the same ones that are occurring today. If this is true, then the geologic column is evidence for the passage of deep time. Secular scientists have gone to great lengths to study the various strata and assign absolute dates to them. This demonstrates how evidence for biblical events (such as the Flood) may be misinterpreted as evidence for conflicting scientific theories.

The Evidence is Hidden

A final reason that we sometimes don’t see evidence for biblical events is that sometimes scholars who hate the Bible willfully suppress it. For example, the Bible talks about a time when the kingdom of Israel was united under Saul, David, and Solomon. Certain archaeologists have invented a theory that the earliest Israelite kingdom was headquartered in Samaria, not Jerusalem. They believe that the early kings of Israel never existed.

In order to support this theory, these archaeologists have re-dated fortifications built by Solomon so that they cannot correspond with his reign. Additionally, when a well-respected archaeologist discovered David’s palace, they refused to acknowledge her find. Finally, they have willfully left key finds out of their excavation reports when those findings support the Bible.

A great deal of evidence for biblical events has already come to light. Many articles and resources are available here on New Creation Blog. For more resources on Creationism, see our Free Resources page, our Curriculums and Education page, and our Creation Websites and Journals page. Other great resources are available from ministries such as Associates for Biblical Research, Source Flix, and Apxaioc.

Finkelstein, Israel (1996). “Ethnicity and Origin of the Iron I Settlers in the Highlands of Canaan: Can the Real Israel Stand Up?” Biblical Archaeologist 59: 198–212.

Petrovich, Douglas (forthcoming). Origins of the Hebrews: New Evidence of Israelites in Egypt from Joseph to the Exodus. Nashville: Compass Classroom.

Abigail is a PhD student at Ariel University, where she is studying archaeology. She has a Master’s degree in Biblical History and Archaeology from The Bible Seminary. She is the Assistant Dig Director at the Shiloh excavations in Israel and has served as Objects Registrar and Square Supervisor at both Shiloh and Khirbet el Maqatir. She has also worked at the Mount Zion excavation in Jerusalem and at the Temple Mount Sifting Project.

Thank you, Abigail, for a great read. In the wisdom of God, the world, “by wisdom knew not God.” One reason evidence may not seem to be forthcoming is that we lean unwisely on scholarship that may or may not be seeking direction from God. Those studying archeology with faith as a guide have found abundant evidence.

there’re a lot of evidence world wide destruction that points to catastrophic flood event. don’t need to find noah’s ark. as a only proof. megalithic stone structures that are scattered like toys, out of place archeological objects found deep in the ground. old writings of flood. unexplainable massive buildings that modern machines can’t build. etc.

There is evidence of the Exodus, it’s in Saudi Arabia around Jubal Al’Laws, the stone split by Moses with evidence of water coming from a spring underneath and running into the now dried out Wadi, the mass graveyard of the 3000 Moses had executed by the Levites for following Korah, Altar of the golden calf and the stones of the tent tabernacle within the foundation stones not shaped by human hands. Most people (and many Christians unfortunately) adhere to Charleton Heston’s Hollywood rendition of Moses as being historical (it is not), so they are looking in the Sinai Penninsula for Mt Sinai/Horeb when the Red sea crossing would have taken place at Yom Suph on the eastern coast of the Sinai Penninsula leading into Saudi Arabia (ancient Midia back then, where Moses found Jethro who was a midnite priest of a moon god) not the western coast, and from there wondered the desert for 40 years until taking the king’s highway north from there. The rock Moses struck and split in 2 is pictured below. These things aren’t being told because the Israeli antiquities authority does not want the truth coming out and neither do the Saudi Arabians, considering the site too sacred they don’t want archaeologists crawling all over the place disturbing the dead buried there or the gold jewelry relics discarded being looted by thieves and grave robbers. Even in Egypt Joseph left stele there to be found, but you have to remember he was not Egyptian, and they would have called him an Egyptian name and the key to finding the evidence he left would be to track his Egyptian (Mitzraim) name down. The evidence IS there, just people are not looking in the right places. 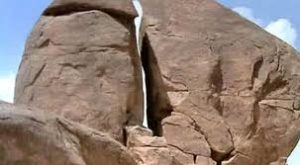 Thank you for your comment. Although the debate on the location of Mount Sinai is far from settled, there are some compelling arguments for locating it in Saudi Arabia. I have read some of the research on Jabal al-Laws. It is a fascinating site that was occupied in both the Neolithic period and the Nabatean/Roman period. So far, I have not been able to find any evidence of occupation dating to the time of Moses. That is not to say that the Israelites were not there, simply that no valid evidence has come to light yet. As you noted, access to the site is restricted, making it difficult to investigate further.

Having excavated for many years under the antiquities authority, I am fairly certain that they are not interested in hiding the truth. In fact, they penalize archaeologist who do not publish their finds in a timely manner. In fact, the Saudi Arabian authority themselves published a scholarly report on the site.

I think that it is an interesting site, and I hope that someday it is possible for archaeologists to conduct further research there.

Have you Seen the Movie?

Abigail is a PhD student at Ariel University, where she is studying archaeology. She has a…
Read More

History of Life: His Story